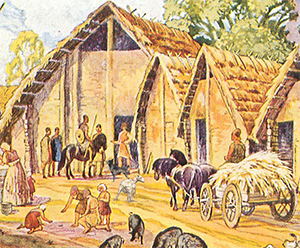 Schleicher’s fable and The king and the god
by Carlos Quiles and Fernando López-Menchero
is licensed under a Creative Commons Attribution-ShareAlike 4.0 Unported License.

This section has been integrated with our texts on North-West Indo-European in the series A Song of Sheep and Horses. Please refer to that section for up-to-date reconstructions of the fable.

Schleicher's fable is a text composed in the reconstructed Proto-Indo-European language (PIE), published by August Schleicher in 1868. Schleicher was the first scholar to compose a text in PIE. The fable is entitled Avis akvāsas ka ("The Sheep and the Horses"). At later dates, various scholars have published revised versions of Schleicher's fable, as the idea of what PIE should look like changed over time. The fable may serve as an illustration of the significant changes that the reconstructed language has gone through during the last 140 years of scholarly efforts.

The first revision of Schleicher's fable was made by Hermann Hirt (published by Arntz in 1939). A second revision was published by Winfred Lehmann and Ladislav Zgusta in 1979. Another version by Douglas Q. Adams appeared in the EIEC (1997:501). In 2007 Frederik Kortlandt published yet another version on his homepage.

Our current version is available in the following links:

The King and the God in Proto-Indo-European

“The King and the God” (Eur. rēḱs deiwos-kʷe, Lat. rex deusque) is the title of a short dialogue composed in the reconstructed Proto-Indo-European language.

The King and the God in proto-languages

Version: 7/03/2007
These translations are outdated and need thorough corrections

There are no older versions of this file