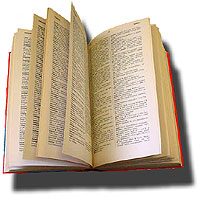 The detailed English/Latin – Proto-Indo-European lexicon has been compiled for years in an Excel file:

Version 6 is provided in its original format, or divided in two PDF files:

Please note: the first versions of these files, outdated, were released in 2009 and are displayed in Google Sites

Before the collaboration of Fernando López-Menchero, there was a section in the grammar dedicated to etymological notes and tentative proposals of a Modern Indo-European lexicon based on modern European words. Most of these examples are outdated, since the aim of the project today is to look for an actual Late Proto-Indo-European reconstruction (with emphasis on North-West Indo-European). Nevertheless, the notes are a good example of the potential of back-translation of common modern Indo-European words:

Etymological Notes in PDF (or read HTML) of A Grammar of Modern Indo-European, First Edition.

Latest Revisions of the Indo-European lexicon

You can share comments and corrections of any kind in form (spelling, expressions, sources) or content directly with the author at [email protected], or you can share them publicly in the appropriate forum thread for discussion. Changes will be made as soon as possible after notification:

We use cookies on our website to give you the most relevant experience by remembering your preferences and repeat visits. By clicking “Accept”, you consent to the use of ALL the cookies.
Cookie settingsACCEPT
Manage consent

This website uses cookies to improve your experience while you navigate through the website. Out of these, the cookies that are categorized as necessary are stored on your browser as they are essential for the working of basic functionalities of the website. We also use third-party cookies that help us analyze and understand how you use this website. These cookies will be stored in your browser only with your consent. You also have the option to opt-out of these cookies. But opting out of some of these cookies may affect your browsing experience.
Necessary Always Enabled

Any cookies that may not be particularly necessary for the website to function and is used specifically to collect user personal data via analytics, ads, other embedded contents are termed as non-necessary cookies. It is mandatory to procure user consent prior to running these cookies on your website.