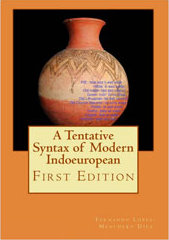 These are the latest news: Fernando López-Menchero’s A Tentative Syntax of Modern Indoeuropean has been published online and in printed version. This book contains hundreds of common sentences and expressions, comprehending a large variety of usual situations and syntactic structure, to acquire the necessary syntactic knowledge to speak the ancient language of Late Proto-Indo-Europeans. It Read more about A Tentative Syntax of Modern Indoeuropean published! And a Spanish translation of A Grammar… on its way[…]

Following the initial release date previously announced, the main collaborative textbook published by the Association, A Grammar of Modern Indo-European, has entered a pre-version 4 stage, heading for its second printed edition. Appart from the expected changes in MIE concept (viz. EIE, PIH, etc.) and the correction of errors and ommissions, the structure has been Read more about The collaborative textbook A Grammar of Modern Indo-European, already in pre-version 4, heading for its second printed edition[…]

Be the first to know